Dale Leith is one of Laurel Golf Center’s golf professionals. He taught his first lesson in 1970 as an associate professor at the US Naval Academy. Here are excerpts from an interview with him on what he has learned as a golf teacher.

One thing I disagree with is making a profound statement about anything in golf, because the way it’s perceived is not always right. In other words, someone may say, “I saw Dale say this on that blog.” He said, “I have to stand this way.” But when he stands that way, he still may not be standing the correct way. That’s why I’m a little reluctant to ever make a positive statement like that.

Here’s an exercise that you can do at home to prove this. Take 3 golf balls, and lay them in a straight line like this: 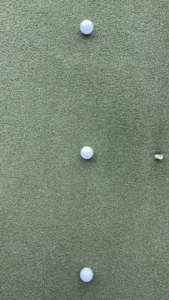 If you stand from one end, you see that the balls are perfectly straight. However, if you line up a shot from the ball in the middle, it may not look straight. It may look like it curves toward you, or away from you. Just because it looks straight, doesn’t mean that you’ll see it that way. 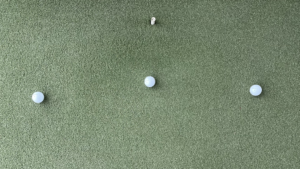 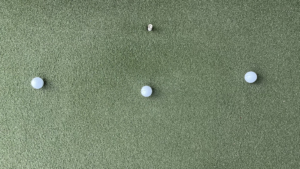 In my first year as a professional, I had a lot of play. I won a lot of tournaments, but teaching is a whole other world. In my first season of teaching there was a dentist that came to me. He was talented and I taught him a good swing, and he shot in the seventies in his first season. Then comes the wintertime, he starts reading these golf magazines. He comes back to me in the spring and he’s whiffing every time. So I looked at his swing, that wasn’t the matter. Then I look at his setup, and he sets up to hit the ball. When he got to the top of his backswing, his head went down about a foot, and then at the end of his downswing he tried to lift his head back up. Why was he doing that? Apparently he read in a golf magazine to keep your head down. So he was overcompensating, and I thought to myself, this would be a quick lesson.

But, 20 minutes later, we’re arguing and he says to me, “My head is not going down!”. I’m not making too much progress here, telling him to keep his head level. I said, “All right, doc, here’s what I want you to do. I want you to raise your head up a foot in your backswing. Then I want you to drop down a foot in your downswing.” He went back, and swung again. His head stayed perfectly still and he started hitting it properly again. His concept in his mind was that his head went up and came down a foot. The reality was that his head stayed level.

Another example is, take a good player, but they have the optics all screwed up. They might be hitting it to the left. But then I tell them to try to hit the ball over to the right. And all of a sudden, they start hitting it down the fairway. So what one’s concept is, is not always the reality of what’s happening.

Onto a different but still relevant story: most people know Bill Russell, who played center for the Boston Celtics and won 11 NBA championships. I played a tournament with him one time. Did you know that he’s left-handed? Anyways, I said to him, “You’ve been in some high pressure situations. How do you handle it?” And Bill starts to tell me a story.

The Celtics were playing against the Lakers. Bill gets up to the foul line, and the bottom line is, if he makes one of the two shots, the team will go on to win the championship. The first free throw he makes, it doesn’t even hit the rim. Completely missed the shot. But Sam Jones, the shooting guard, walks up to Bill and whispers something in his ear. Bill goes and makes the second shot, and makes it, and the team goes on to win the championship.

So we’re walking along, and he’s not saying anything else. I keep pestering him to tell me what Sam Jones said to him. Finally he goes, “You know, I’ve never told anybody about what Sam told me. You’ll be the first. He said to me, ‘You big dumbass. You can’t make a foul shot if you don’t bend your knees.’”

Sam was completely right – Bill Russell had gotten away from the fundamentals. The next shot, he made it and the Celtics went on to win. Whether it’s the NBA championship or a regular season game, it never gets more complicated than the basic fundamentals. I ended up taking this advice about the fundamentals and applying it to my next tournament.

This was in the 80’s. I was a shot off the pace, playing the capital city open in Langton. I started to feel some pressure since I had a chance to win. But I got through the last four holes, and keeping the basic fundamentals in mind, I birdied 3 of them and won the tournament. I didn’t make it complicated, I didn’t second guess myself, saying things like ‘If I don’t hit this fairway, I won’t win’ or ‘I’ve got to get this ball on the green’. I focused on what I could control, like keeping my head down and bending my knees.

You can also learn the fundamentals from a tried and true professional. Dale Leith and Coach Pat Poole are starting a group lesson series running for 3 weeks, on Monday from 6 to 7 PM. The series will start once the weather is predictably warm – please call us at 301-725-4646 if you’re interested, and we will contact you when we decide on a date to start. Three lessons with Dale and Coach Pat normally cost $300, but this workshop’s cost is only $80 per person plus balls. Call us today to reserve a spot!

by Maya Andrews
Nobody likes playing with old, worn out grips. But playing with worn grips can lead to more than just a bad feeling in your hands – worn grips create higher scores by making it harder to control the club face. This means your shots will be less accurate, which is why it’s so important to regularly replace your grips – so you can stay on your A game.

So how do you know when to replace your grips?

Golf magazine says that grips last an average of 40 rounds, with practice at the range counting as a round. The more you play, the more often you will need to regrip your clubs. Of course, if they are falling apart, you should change them before you practice or get on the course. But if they aren’t, you can look them over for imperfections like fading, dullness, or broken cording. Below are 2 examples of grips that need changing:

You can see on the top one that the cording is coming up in some places, and the texture of the grip is rough and stiff. On the bottom one, too much use has caused the grip to become dull and uncushioned. If either of these grips look like the ones on your clubs, you need to replace them before you use your clubs again.

Another way to tell when to replace your grips is how much time has passed since the last time you replaced them. Golfweek reports that, at a minimum, you should change your grips every 2 years. Over time, the rubber in your grips will lose elasticity and lead to the same problems as overused grips. The conditions you play in can also affect when you will need to replace your grips. Heat and humidity will speed up the process of grip deterioration.

Do you need to replace your grips?

If you’ve realized it’s time for you to replace your golf grips, you need to come to Laurel Golf Center. Most club repair shops will return your regripped clubs in a week or two. With Laurel Golf’s 24-hour turnaround policy, your clubs will be ready for you to play the next day. This means you can get back on the course faster! You can bring your own grips for us to install, or choose from our curated selection of the most popular and quality grips on the market right now.

We also have special deals for regripping, running until April 15th, 2022. The first is, buy 9 grips with us and get the 10th one free, on in-stock grips (regripping fee included in price of grips). The other deal is that we’re taking a dollar off of all grip installs for grips that you bring in. Simply bring your equipment to our shop at 9801 Ft. Meade Road in Laurel, MD. You can also call us at 301-725-4646 to find out exactly what we have in stock. Remember, we’re only running these discounts until April 15th, so make sure you come to Laurel Golf to regrip your clubs and save money!